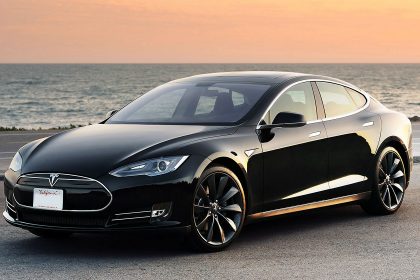 While driving on the highway, I noticed this different looking car in the lane next to me. The car was a long sedan that had a very smooth and sleek look. It had door handles that were flush with the body of the car. Thinking that this car was very cool, I wondered what manufacturer made the sedan. As he passed me, I saw the logo on the back of the car. The logo was just a “T” with a curved top. I have never seen this logo before and I know just about every current car manufacturer. After doing a little research on my own I found out that this mystery brand was called Tesla. Tesla focuses on the electric car and the sleek looking sedan I saw on the highway was a Model S.

When I think of electric cars, I picture these ugly looking cars that were just designed specifically for getting the most mileage. The average electric car gets around 40 to 100 miles on one charge. Some of the more expensive electric cars can get around 200 miles on a charge, but these are usually priced out of the normal person’s price range.

The Tesla Motor Company as pretty much changed the way people look at the electric car. Their electric cars are very stylish and unique. The style of their cars has converted many people into electric car owners. Tesla’s cars get a range upwards of 200 miles, but the more range the car gets the more it will cost. That being said their only drawback is the price; their top selling car has an MSRP of $70k. For most people that is way too much for a car.

Why Haven’t We Converted To Electric Cars?

I think most people would like to own an electric car. There are just a couple of reasons why we have not made the switch yet. The main reason would be that they are out of the normal person’s price range. If the price hasn’t put anyone off the range of the electric cars more and likely will. Most of the cars only get about 100 miles on a single charge. While 100 miles is good to get you to most places for daily commuting people don’t like the fact that their car could die and they would have to buy a new expensive battery for the car. If there are more charging stations throughout the city just like gas stations, there would be more people with an electric car.